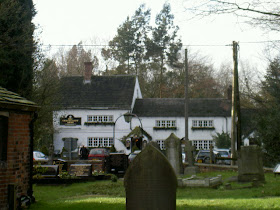 This building dates from the 16th century and was once a former Nunnery. It was used as a resting place for weary funeral parties. It was custom for funeral parties to stay overnight at the nunnery and the coffin was taken to the church via an underground tunnel the following day.

It is thought a possible explanation of the change over to a pub was because as the building provided ale for the travellers, alchol was already on site and when the nuns left, a public house was born.

The underground passage was blocked up many years ago because of the foul smell in the air by the then owner Mr Lawrence.

-- The ghost of a nun is said to walk inside and outside the building. Her name is Sarah and she is 35yrs old with black hair. She always looks sad.

This was our second investigation with a medium. I am not a believer in mediums. Not that I am saying that all mediums are fakes but I trust what I can see, hear and feel myself.

So with Simon (medium), myself, Phil, Kath and another member, we started at 10pm.

Simon had not been told where he was going and on the drive towards the pub, he told Phil that he had picked up on a short man named Albert, who had been hit by a horse on the road just before the pub.

We had a walk around the pub, just to get our bearings and we took temp readings.

This fireplace is where the ghost of Sarah has been seen. But Simon was picking up on a man with dark hair wearing an overcoat with a hood. He is wet and he is carrying a little blond haired girl. She had drowned in water and he was trying to get help. Simon could not get any names but he got the year 1846.


We went for a walk just at the back of the pub in a small wood. This wood did feel a little spooky and as I had a little walk on my own, it is easy to let my imagination run away with me. Simon, once again, came up with some information. He picked up on a 30 year old man called Ralph. He was a local lad. Ralph had been beaten up and murdered by a gang of men waiting for him as he walked through the woods.


By 11.30pm, we headed back into the pub. Ane we started in the Diningroom. Kath felt a cold spot by the fireplace. Simon had picked up on a male named Frank, aged 47 and the year was 1847. Simon was then able to combine the story of Ralph with Frank.
Frank was a poacher and he was waiting for Ralph to meet him in the pub to buy his stolen phesent. Frank was pacing up and down getting angry because Ralph had not shown up.

While we were in the diningroom, Simon also picked up on a woman who was standing next to this pillar. She was watching us. Her name was Mary Anne. She was about 40 years old and about 5 10 in height. This lady could be confused as the nun, as she is dressed in black. She had something to do with the pub, but didnt run it.


Kath and I went into the Lovall suite about 12.30am. Phil and Simon stayed in the diningroom.
Kath and I started a sceance and Simon joined us a few minutes later, as he said Ralph and Frank had followed us into the room. During the sceance we were getting no clear information but we did hear loud bangs.


We left the suite at 1.30am and as we walked through the pub, simon picked up on a woman dressed in black with fair hair. She was moarning because her son, Ralph, had been brought into this building before his body went into the churchyard. Simon also came up with the number 36 and two other dates 1826 and 1846-47. Other information came through. Names-- Frank Jameson or Frank James Westbrook wjo died on 7th September and Ralph Bartholomew who died in May or June. The town of Tarporley came up but we dont know why. Perhapes this is where Frank lived.

We set up another sceance at 2am in the dinningroom. We got no other information but we heard a few bangs and felt a couple of blasts of cold air. I saw two blue lights. 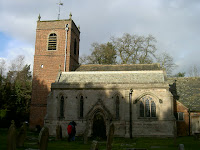 At 3am, Phil, Smon and myself deceided to have a walk around the graveyard to see if we could see any names that we had come across during the investigation.


While we were walking around, Simon told us that a woman in white was watching us


Not finding anything, we met up back in the pub to discuss the investigation.

We left just after 4am.


Without the information Simon gave us, the investigation would have been very quiet.
I have been unable to trace any information that Simon gave us and I will have to leave it to you to deceide if you beleive him or not.
If all those people visiting us that night, you would have thought that I would have been able to pick up on more evidence than we did.
Of course, with everything taken into account, there is no way I can say that this building is haunted, more information and eveidence is needed.
Gill Stubbs at 05:05