Winsford only became a town in 1894, before then it was in two parts - Over and Wharton. Both in the Doomsday Book of 1086.

The pub was once called The Railway Hotel. It started life as a farmhouse.
The restaurant was once home to The Mona Pullman Carriage made in 1933. It worked the London to Brighton line and in 1948 carried The Queen. It has since been taken away and an extension has been built.

On the 17th April 1948, this area was the scene of a train crash at the back of the pub. At 5.40pm, The Princes's Arthur of Cannaught was passing through Winsford Junction, when a solider pulled the communication cord and as the train slowed down, he jumped off and left.
Meanwhile The City of Nottingham train was fast approaching behind. At the very last moment, the driver saw that this train had stopped, it tried to slow down but it crashed into the back of the standing train.

The dead were taken to a temporary mortuary in John street and a lot of the passengers were given shelter in the pub and many homes nearby.


INVESTIGATION
I was here with PRUK, me, Kath, Phil and Marsha.

We heard several weird noices in the room next to the old barn. A chair fell off a bench when no one was near it. Phil heard growling noices in the restaurant. We all heard the sound of glass bottles being banged together behind the bar. We turned the glass cleaner off incase this was the reason for the noise but we heard the noise again.

We moved into the old barn, where we did a sceanne. We picked up on a solider. We couldnt get 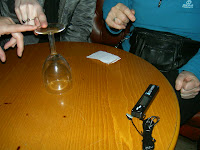 much information from him, only the letter D for his first name and the letter E for his surname.
We also picked up on a small girl, about 4 or 5 yrs old. The girl had had an accident and hurt her head, neck and back. She later died. We think she had fallen out of the loft in the barn. She didnt like animals or the barn. Then all of a sudden, we were joined by her grandfather who wasnt happy. He didnt want to talk to us or let his grandaughter talk to us. The room did changed a little, call it imagination but the room did feel colder and I started to get the feeling of being watched.

Nothing else was heard from the grandfather and grandaughter but a third man came through. He was not a nice gentleman and so we ended it there.

We had seen shawdows along the wall all night, on and off. It wasnt car lights. We had all heard strange noises all night and we could not tell where they came from.

At 3.45am, we all heard a loud sigh coming from the bar area. But we saw nothing and nothing else happened. We finished shortly after.


This was a very interesting investigation. Not a great deal had happened but it was the first time something had moved. We had also heard noises that we didnt know what they were and those strange shadows on the wall.
This made me more determined to find out more.
Posted by Gill Stubbs at 05:18