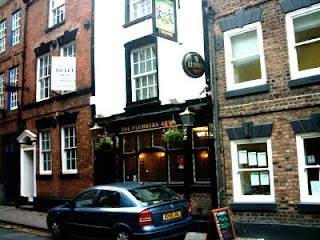 
Built in the 1500's.
It was a Blacksmiths, a Coaching Inn and a Funeral Parlour.
It was previously called Fagins.
This building backs onto the old roman wall.
There are at least two main ghosts plus several who are seen only for a short time.
- figures in the bar, seen then gone quickly
- female walks through one of the 2nd floor bedrooms
- figure walks passed the outside of the 1st floor livingroom window


This was my first ghost hunt with my new group Parnormal research. We started off in one of the two so called haunted bedrooms. As we were asking out, some of the group felt cold spots. They also saw a couple of light anomolies.

We left a trigger object in this bedroom but it did not move. 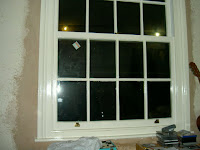 I stayed in the livingroom. A woman is sometimes seen through the window. As this is the second floor, I looked out of the window to see if there was a walkway or steps outside. There was nothing and unfortually, after a couple of hours nothing happened in this room.

There was nothing happening to any of the other groups, so we decieded to group together in the bar.
\we started with table tilting. After a slow start, the table started to move. No information as such, so we stopped.
We followed this with a sceannce. The glass moved to me a couple of times but we couldnt find out why or who was speaking to me. The glass then moved to another two members of the group and they received personnel messages. 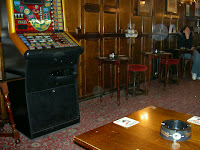 After this we did pick up on past local's and a previous landlady from the 1930's but no names. Without names, I cant do any research.
We closed the sceannce down and sat in the dark for a while just asking out.
A member felt her arm go cold and some felt cold spots.

On the whole, it was a very quiet night but at least I had worked with my group and got to know the members. The most important thing was I now know I was on the road to becoming a parnormal investigator.
Posted by Gill Stubbs at 08:25