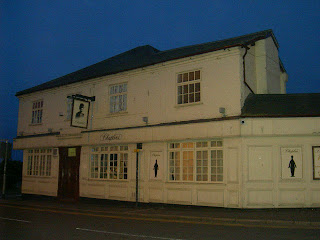 
The name of this property has changed a couple of times from Lloyds and before that The Queens.
The property used to be on the site of the local swimming pool.
The property was also a small house and a farmhouse.

There is a tunnel, it is said to run under the pub to somewhere by the bus station.
The area used to have small terrace houses. 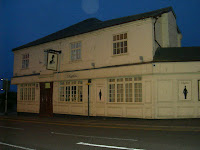 REPORTED PHENOMENA
... something in the cellar
... a man behind the bar
... a woman who walks the building
... something else that follows the woman around
... loud noises and bangs
... the gentleman who greeted the new landlord on his first day


I went on this investigation with Phil and Marsha, on behalf of PRUK, the landlord, a medium named Matt (invited for the evening) and a couple of the landlord's friends.

We started at 11pm at the far end of the pub in a sitting area. Phil got some strange readings from his EMF recorder and I felt very cold. The Matt told us that the woman was walking around us. Matt got the name LUCY and said that something was missing in the pub. 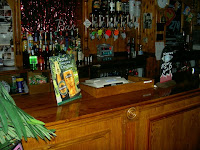 By 1am, a couple of the group saw an outline of a figure behind the bar and they got the feeling of being watched. Could imagination be running a mock or was something starting to happen?


We all stood in the middle of the bar area and started our first sceance. We used a board and glass. A lady came through but she couldnt spell out her name. She gave us the year 1969 and she had been a customer of the pub. Matt was getting some personnel readings and then the glass started to count down, so we closed the board down. A few people smelt tobacco and cherries.

We started the sceance again but one of the group started to feel sick and the glass went hot. These are said to be bad/negative signs, so again we closed it down.

It was now 2am and most of the group stood in a circle and we placed a candle in the centre. Some felt as though they wanted to float and the candle's flame seem to move (prob a slight breeze). Everyone smelt cherries again, Phil had a pain in his stomach and I took a photo of a single orb (yes hold the press....... a single orb/dust)

The circle closed half an hour later and the landlord felt as though someone was standing behind him but I could see anything. 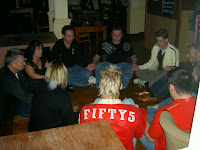 We tried again with the table and glass. The information we got was .... two girls came to us, Elizabeth age 15 and Ollie age 7 (her full name was Molly). They were sisters and they died of T.B. in 1869. Many children came to play here because of the link with the school and swimming pool.

We finished at 4am


Interesting night but I think we relieved on Matt too much and we dont have any proof to prove or not what happened that night, happened.
Posted by Gill Stubbs at 07:57