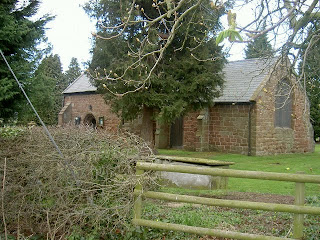 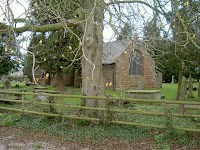 St Edith's church has been the site of a great saddness.
There is a legend that there was a flood and most of the village of Shocklach was flooded underwater. People headed inside the church because they thought they would be safe. But the water still came in. There are still scratches on the door and walls and this is where they tried to get out. These can still be seen today. 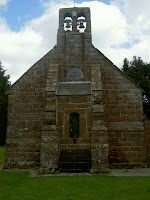 The church used to be in the centre of the village and another legend is that The Black Death came to the village. People moved away. They didnt move far and build a new village slightly further away from the church.
This is why the church now stands alone in fields.

The Norman Nave was built about 1150 with a 14th centry Chancel with a Norman south doorway.
The pulpit dates from 1687.

PARANORMAL SIGHTENINGS
... One night of the year, the Bereton family return to the church. Phantom coaches are seen. I have two dates for when this happens ... March 21st and Aug 28th. The first recorded sightening of this was in 1906.
... Several sightenings of an old woman by one of the graves.


Kath, Phil and myself came here.
Kath and I came here earlier in the day just to get the layout of the area. Eventhough we were on our own, I did get the feeling of being watched but we were in a graveyard where your imagination can go into overdrive. If I was feeling like this now, how would I feel after dark.

As we drove down the single track lane towards the church from the main road, we all saw what looked like car lights behind us coming up quite quickly.
We were about three quarters of the way down, so I drove quicker and turned my car round on by the church and headed back up the lane. As I have said, this is a single track lane and there is no way two cars can pass eachother. I drove all the way back to the main road but there was no sign of the other car or any lights.
What had been behind us? 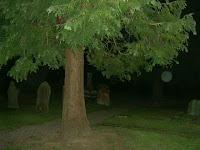 I drove back to the church and we started the investigation but I must admitt, I did keep looking back at the lane all night and my little imagination of being watched was well and truly back.

We all heard noices but we were in the middle of the countryside. 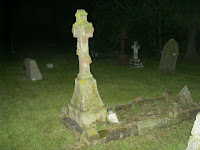 I took a lot of photo's with orb's and just as many without. 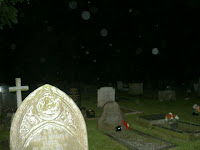 I could not find any graves with the name Brereton on.

We could not go inside the church but Phil thought he heard voices or singing coming from inside.

We stayed most of the night until just before dawn.

What a wonderful spooky church. What had been those lights? Did Phil here voices from inside the church? Well a second visit is planned and hopefully these questions will be answered.
Posted by Gill Stubbs at 05:31