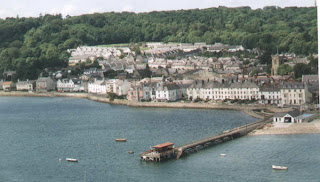 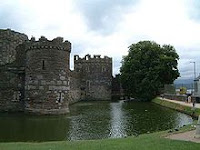 Beaumaris was orignally a Viking settlement known as PORTH Y WYGYR (Port of the Vikings).
The town itself began to develop in 1295, when Edward 1st of England (after he conquered Wales) built Beaumaris Castle as part of his chain of fortifications around the North Wales coast.


Shipbuilding was a major industry in Beaumaris and during the Saxon times, Beaumaris was one of the three important Saxon ports in the UK.

Extending into the Menai Strait, is a piece of land nicknamed GALLOWS POINT. This is because the town's gallows ere erected there, originally named Osmund's Eyre.

RED HILL is so named because during the second Civil War in 1648, the hill leading north from the town was said to have been covered in blood from The Siege of Beaumaris. 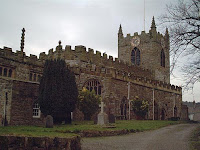 Notable buildings in the town include the castle, a courthouse (built in 1614), St Mary's Church (14th century), town goal, timber framed Tudor Rose (14th century) and The Bulls Head Inn (built in 1472). Beaumaris Pier was opened in 1846, rebuilt in 1872 after a storm. There was also the site of an old Franciscan friary just to the east.

Beaumaris was also famous for pirates, many lived in the town. It was a great place to land their smuggled goods either near the town or along the coast. 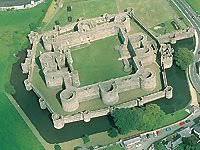 Beaumaris Castle was the last of the castle's that Edward 1st ordered to be built during his campaign to conquer North Wales (others included Denbigh, Conway, Caernarfon and Harlech). He commissioned the building in 1295. The castle was designed by Master James of St George but it was never completed. 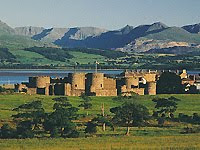 This site was choosen because it ensured control of the Menai Strait and it stood looking down on GARTH CELYN, the headquarters of The Prince of Wales prior to the Edwardian conquest of 1283 on the opposite shore.

Beaumaris was awarded a Royal Charter by Edward 1st (which was similar to what he had done in his other towns). This meant that the native Welsh residents of Beaumaris were not allowed to carry weapons, buy houses or land, hold meetings and hold any civil office.

Work began on the castle in 1295 and continued for 35years. Over 3,500 workmen were employed but finances and materials ran out when King Edward turned his attentions towards Scotland, as his Welsh Conquest was nearly over and he needed his money for The Scottish campaigns.

Such work as the towers of the inner ward or the great gatehouse were built to their full height. Many other buildings were left unfinished but smaller jobs were still carried out into the early part of the 14th century.

During The English Civil War, the last battle was fought here and if the Royalist had won, Beaumaris may have been the capital of Braitain, as local landowner Colonel Bulkeley had invited Charles 1st to rule from his home at Baron Hill and he may have used the castle as his base. But the Parliamentarins won. The castle itself did not suffer during the civil war and it is now run and managed by CADW.


This was not an investigation as such but a family day out. But whenever I visit a place such as this, I always try and conduct my own mini investigation.

I go off on my own and ask questions. I always carry my recorder and camera. I look a little more closely at my photos because you just never know.

This time I came away empty handed but I would love to do a full investigation here. 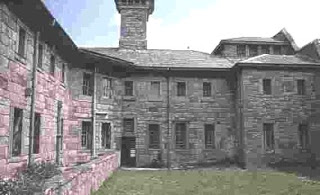 The gaol was built in 1829 and designed by Joseph Hansom (designer of the Hansom cabs). It was expanded in 1867 due to an act which meant that the gaol could add more solitary confinement cells. The gaol could now accommadate approx 30 inmates but it closed just 11 years later.


The building has since been used as a Police Station until the 1950's, a child's clinic and since 1974 a museum. The town's air raid siren was located here during the second world war and it was still in operation during the Cold War, incase of nuclear attack.

Punishment was brutal and harsh. Punishment through hard labour was its main aim. The prison's most brutal methods included the whipping room with a whipping frame, stretching racks and chains. There was also a treadmill outside in the courtyard. This treadmill pumped water to the top of the building. So it was a job as well as a punishment. 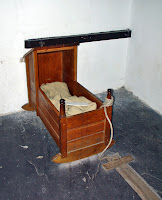 The Nursery
This was for women who had babies and brought them in with them and for women who gave birth in prison. Women were able to rock the child's cradle from the workroom below using a rope without stopping their work.

The Woman's Workroom
The women worked from 6am (8am in winter) till 6pm. Their work included spinning, sewing, knitting and in other parts of the gaol they did the cooking, cleaning and washing.

Kitchen
Their diet included oatmeal, bread, meat, potatoes and soup. The quanity of food given depended on the work you did and the lenght of your sentence. Food was prepared by the women prisoner's. It was served in the workrooms or cells. Stoppage of meals was a punishment. Prisoners confined in the punishment cell were only given dry bread and water.

Punishment Cell
This was completley sound proof and dark. You were sent here for refusing to work, speaking to other prisoners in the exercise yard and bad behavior. 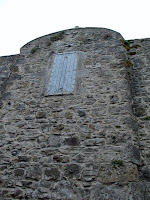 This was twice the size of the ordinary cells. And this also had a fireplace. On the morning of execution, the person would leave the cell, walk along a corridor to the door in the wall and along a wooden ramp to the gibbet. 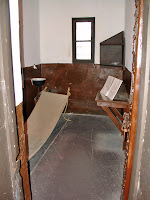 These were 10feet by 6feet. There was a hammock or wooden bed, a seat, table, enamel washbowl and toilet (which was flushed by water from the washbowl) in the cell. 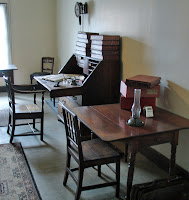 Other rooms in the gaol included The Governor's Office and a Chapel.

ESCAPES
Only one person was able to escape from the gaol. His name was John Morris. He escaped on the 7th January 1859, using rope he had stolen. His escape was slightly amazing because he broke his leg whilst escaping but he still made it out of the town before he was recaptured.

EXECUTIONS
There were only two hangings that took place here.

The first was William Griffith in 1830. He was sentenced for the attempted murder of his first wife. William tried to barricade himself inside his cell on the morning of his execution. He was dragged to the gibbet.

The second and last hanging was Richard Rowlands in 1862. He had been found guilty of murdering his father in law but always protested his innocence. Legend has it that he cursed the church clock from his gallows, saying that if he were innocent the four faces of this clock would never show the same time. Which for a while after his death they did not. 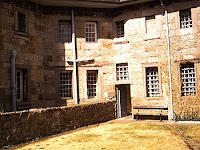 Both men were buried within the walls of the gaol, in a lime pit. But no one knows the exact location.


It is no surprise with the history of this building that there are tales of ghosts. From Pirates to the last Civil War battle, what other events have happened in this area before the gaol was built.

Even as a gaol, there has been misery, confinement and death here. The walls and the land the gaol is built on, must hold some fantastic tales.

Walking around this building, it is quite easy to imagine the harsh life that the prisoners use to

have. Even though I caught nothing on camera or my recorder, I did get the feeling of being watched esp as I walked down the corridors. I would love to walk this building on my own just to see if anything happened. Fantastic building.
Posted by Gill Stubbs at 11:56