THE BOOT AND SLIPPER 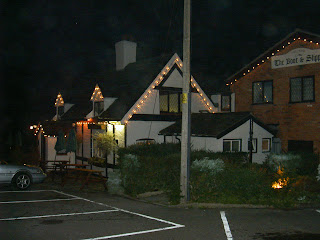 
This is our third investigation here for myself, Kath and Phil. Since Christmas time, Trudy said that she had seen Ray a couple of times. And a customer had seen a male figure wearing a blue waistcoat. Why did figures appear when we were not there?

We had a quick walkround and caught a few orbs. Then we set up for a sceance in the extension. Apart from Trudy feeling cold on her right side, nothing happened.

About 1am, we moved the sceance into the small diningroom. This proved more interesting. A couple of people started getting cold. According to the board, Tom Oakes, Ray and another man and woman came through but we couldnt get the other male and female names. Personnel readings came through for two people at the table but some of the details were wrong, so we thought that someone was messing about.


At this point, me and Kath deceided to go and sit in the extension for a while. There was movement under the stairs and Kath saw two small lights.

We returned to the sceance and Kath asked if they could effect the EMF reader(which had been quiet all night). The EMF straight away started flashing red. Mixed messages and wrong spellings were coming through on the board and no one could understand the messages, so we called it a night.

It had been a real mixture of an evening. Parts of the sceance had been promising. But most of the night had been very disappointing. I had hoped for more.
There is a new landlord here now but I hope that one day we could return for another investigation.
Posted by Gill Stubbs at 04:46