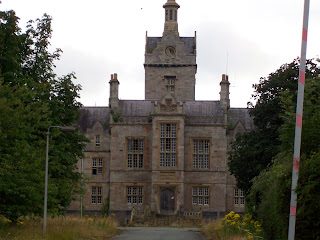 
Me, Kath and Steve arrived at 9pm. This was Steve's first visit to the hospital but of course me and Kath had been before. 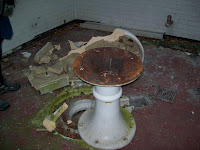 We walked around the area and then headed towards to motgue. Just before we went into the morgue, Steve felt as though someone was standing behind him. Was it the same person that had knocked my rucksack off my back on my first visit? As we went into the morgue, Kath and I were disgussed that more stupid, mindless people had been in again. We stood asking out and taking photo's, but nothing happened. 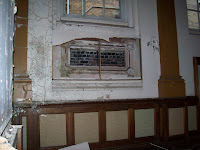 Just after 10pm, we headed into the main building. This once beatiful room had been left to rot.
We stood in the hall asking out. Kath and Steve heard a male voice but they couldnt make out what was said. I didnt hear anything but I was standing further down the room. 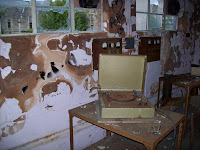 We continued on and we went up to the 2nd floor. We found the film room overlooking the hall. 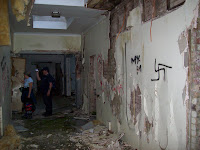 We continued along the 2nd floor corridor. At the end of the corridor, Steve saw a faint grey shadow. Just after this, I saw a tall dark shadow but I couldnt tell if it was a figure or not. Steve felt sick in this corridor. After we checked that no one else was in this area, we left. As soon as we left the 2nd floor, Steve didnt feel sick anymore.

We walked towards wards 5-10. We stood asking out. I stood at one end of the room and Steve and Kath stood at the other. Steve and Kath heard a voice saying "YES". Steve saw a small light and he also heard a noise. Kath went cold around her arms.

It was now about 12.30am and the three of us stood outside in the courtyard. I heard a woman's voice. Kath heard a whistle and both Kath and Steve heard a male voice.

We left about an hour later.


What a great night. I do think we were followed on this night and they were trying to talk to us.
I am planning another visit. 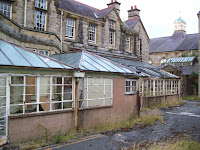 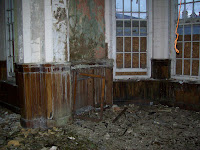