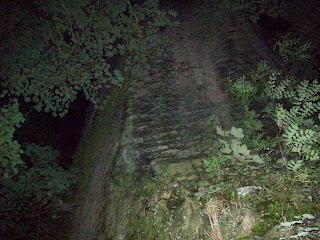 
HISTORY OR THE CASTLE 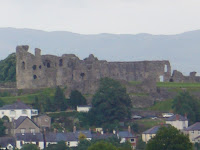 There is a history of a fort on this site which dates from The Iron Age. So this site has always been an important stronghold.

The first stone built fortress was built by DAFYDD AP GRUFFUDD. This Welsh leader was defeaded by Edward 1st in 1282 during his campain into Wales.

Edward 1st gave this land to Henry de Lacy. He was one of the King's Chief Commanders. Henry de Lacy removed all traces of the Welsh Fort and it was knocked down and built the stone castle we see today. The castle was built in two phase's because in 1294, the welsh lead by Madog ap Llwelyn, lead a revolt against the English. This only lasted a year and Denbigh was returned back to Henry de Lacy.

In 1400, the forces of Owain Glyndwr attacked Denbigh. The town was badly damaged but the castle was left fine.

During the 16th century, Robert Dudley, Earl of Leicester, held Denbigh Castle and its Lordship between 1563 until his death in 1588.

During the English Civil War, the castle was repaired by Colonel William Salisbury and garrisoned for King Charles 1st of England. He stayed here briefly in September 1645. The following year, the castle endured a six month siege before surrendering to the Parliamentarian forces for the Royalist prisoners.

During the restoration of Charles 2nd in 1660, the castle was abandoned and left to fall into decay.

The castle is now run by The Welsh Heritage Agency.

PARANORMAL ACTIVITY
--- GREY LADY walks the castle grounds. It is said she wears a long white/pale grey dress.
--- ANOTHER GREY LADY walks through the woods, around Goblin Tower and down as far as Denbigh school. This lady is said to be extremely bright and is said to wear a peaked cap and coat.
Are they the same lady? Grey ladies are normally assosiated with death and loss of a loved one esp a child. Perhapes at least one of these ladies could be the mother of the child in our next story and is still looking for him. Or it is the same lady and she is still looking for her son but as she gets nearer to the site of her sons death, she get brighter but she doesnt realise this.
--- SAD LITTLE BOY, this little boy has been seen staring out of the windows of Goblin Tower. He is said to be Henry de Lacy's son who died in the tower following an accident during its building. Stones are also said to be thrown at passers by.
--- KNIGHT AND DRAGON this nightly battle between a ghostly knight in full armour and a ghostly dragon takes place just outside the castle walls. It is said they disappear when anyone walks towards them.
--- ROMAN CENTURIAN this solider has been seen in full body armour walking on Denbigh Moor. He is said to be an omen of death to anyone who sees him. Some tell that he can also be seen near the castle.


INVESTIGATION
Phil and I had heard that Most Haunted were going to film their next Live show at Halloween at Denbigh Hospital, so we decieded to go and try and pay another visit here before the area would be taken over with the film crew. But we were too late. The whole area was sealed off and more security were on site. We decieded not to push our luck and we went for a walk around the surrounding area. 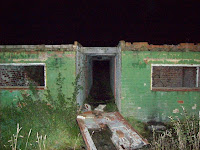 The time was now 8pm and we came across this abandoned ruin building. We had a good walk round this building.
This building is in the middle of a field just off the public footpath at the side of the hospital. I do not know what this building had been used for, but it did seem to be some sort of farm building. It was shaped like the letter H with a corridor running through the middle with two rooms on each side of this corridor 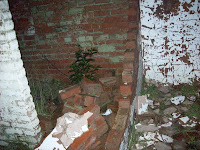 We conducted a small investigation by asking questions and taking photo's. Nothing happened and after a couple of hours, we left with more questions than answers.

Just after 10pm, we had to deciede what to do next. We had already tried to get into the hospital and failed, the castle was already closed so we couldnt go there, another fail. What a night but I always try and have a back up plan, just in case. So I told Phil the story of the boy in Goblin Tower.

There is a path around the castle and this goes past the tower and we also would be able to explore the woods for the grey lady.

This whole area is spooky and it is very easy to imagine the feeling of being watched.

We wanted to focus on the little boy and the grey lady. I wanted to try and find out if this grey lady could be his mother.

We could not enter the tower as we were standing outside the castle grounds but we had a clear view of one of the windows. 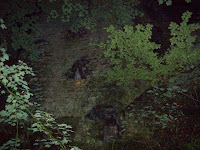 At one point I did notice a strange shape in this window and it did not show in all my photos I took. I beleive it was natural and depending on where you stood, meant that you couldnt always see it but it could give the impression of a hooded shape looking out of the window. Is this what started the tale of seeing someone there? 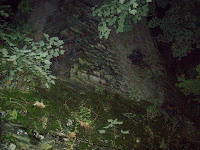 Goblin Tower is very slowly crumbling away and this could be where the idea of someone throwing stones comes from.

Nothing happened to us on this night but a second visit is planned where we will also include a full visit of the castle.
Posted by Gill Stubbs at 05:43