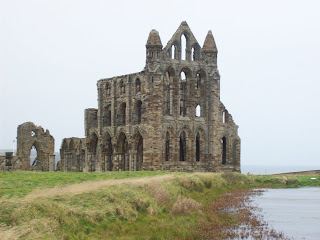 
Whitby is a fishing and tourist town near Scarborough, North Yorkshire.

hitby is well known for a few things. Whitby jet is a black mineral found in the cliffs. It has been used for jewellery since the Bronze Age. It was favoured by Queen Victoria as her mourning jewellery after her husband Albery died. It was one of Whitby's main industries.

Bram Stoker based part of his book, Dracula, on the harbour, churchyard and abbey. Dracula arrived on board the ship Demeter (taken from the beaching of the Russian ship Dmitri at Whitby). The churchyard at St Mary's is the graveyard that Dracula ran through as a wolf after leaving his ship. The Abbey gave Bram Stoker the idea for the asylum. 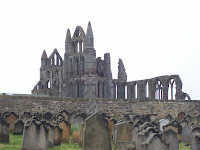 Many fossils have been found in and around Whitby, including an entire skeleton of a pterodactyls. Three green ammonites are on the town's coat of arms. These ammonites are show with snake heads and this is assiciated with St Hilda.


Whitby Abbey was founded in 657 by Oswy, King of Northumberland, to redeem a vow that if God granted him victory over his rival Penda, the Pagan King of Mercia. He would build a monastery and consecrate his daughter Ethelfleda(then only 1 year old), to the service of God.
He appointed Lady Hilda as founding Abbess. A famous story is associated with Lady Hilda(later St Hilda). Whitby was over run with snakes and she turned them all into stone. In a way, you could say that this is supported by all the ammonitae or snake stones found in this area.

During the Viking attack in 867, the town and abbey was attacked. The abbey lay in ruin until the Norman Conquest when Whitby was assigned to Hugh de Abrincis and then to William de Percy.

During 1078, the abbey was refounded by William de Percy and he put Regenfrith(Reinferd), a soldier monk in charge. It was dedicated to St Peter and St Hilda.

The Abbey has had a few name changes during his life. First it was called Streoneshalh (named after the Roman settlement), then it was called Presteby (meaning the habitation of Priests in old norse), the Hwytby, then Whiteby (meaning white settlement in old Norse) and finally Whitby. 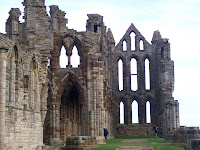 This abbey lasted until 1540, when it was abandoned because of Henry VIII. The building was left to fall to the ruin shell we see today.

In 1763, the abbey was shaken by a storm on the night of 2nd December. The western wing including its Gothic pillars and arches collasped. 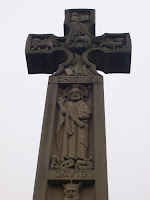 To reach St Mary's church, you can walk using the footpath called Caedmon's walk or climb the church stairs, made up of 199 steps.

These steps have seats built in. Many people rest here but orginally they were put here so that coffins could be placed here so that the bearers could rest.
The church was built 900 years ago and has been altered many times.
A 19th century memorial, Caedmon's Cross is situated at the top of the stairs, entering the churchyard. 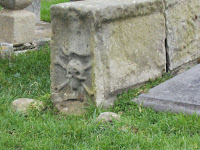 The church is surrounded by tombstones, some rather unsual ones. One such grave is that of Old Gravel Arse. He was an ugly man and he only had short legs, hence his nickman. His wife was very beautiful and it is said that she only married him for his money. He always brought his wife back a gift and this one time, on one of his voyage's, himself and his crew had killed all the crew of a ship they had taken over, they missed this one girl who was wearing a blue silk shawl. He killed the girl and took the shawl home for his wife. His greedy wife loved the shawl and admired herself in the mirror. She shrieked because looking back at her was the face of the dead girl. Old Gravel Arse watched in horror as his wife ran out of the house screaming and threw herself in the sea. She drowned and her body was found a few weeks later. It is said he died shortly after of a broken heart. They are buried next to eachother.

The stolen bells from the abbey are said to still ring on Halloween from under the sea near Black Nab. They had been taken out of the abbey by pirates but their boat sank.

The face of St Hilda is said to show herself at midnight in the abbey's well. This only works if you are a good person. If not, the Devil comes to take you away.

Constance de Beveley was a nun living in the abbey. She fell in love with a knight but they were found out. After he had been sent away, they caught Constance and bricked her up in the dungeon of the abbey and left to die. She is seen in the abbey esp where the staircase was.

The first abbess, St Hilda, is said to still walk the grounds of the abbey. She is wrapped in a shroud and often seen at the abbey's highest window.

At daybreak on Christmas morning, a choir is said to be heard from inside the abbey.

A phantom hearse like coach with four headless horses guided by a headless driver has been seen racing along Green Lane, stopping by the church and then racing along the cliff before plunging over the edge and into the sea.

Old Geoffrey haunts the doors of some of the pubs in the town, talking quietly to people as they enter.

Grape Lane has the ghost of a girl who is on fire. In 1917, Mary Clarke's hair caught fire and the fire soon spread over her. She was taken to hospital but she died soon after. But she is still seen walking down the road, still on fire.

Mr Brown Bushell was born during the 17h century and haunts Bagdale Hall, the graveyard and the woods between Whitby and Ruswarp. He fought during the Civil War but at the end of the war, he was arrested, tried for treason and beheaded. His ghostly body carries his head under its arm.

A large black, fierce dog with red eyes walks the quays. If you see this dog or hear it, you will die.

The Whitby Wyrm is a dragon like serpent which was awaken during the building of the abbey. This fire breathing creature tried to destroy the town but it was banished to the sea. It is said to return every 7 years during a full moon to drag the abbey into the sea by clawing the cliffside.

A mischievous goblin called Hob is said to haunt the country lanes around the town.


Being such a Dracula fan, I have always wanted to come to Whitby. I wanted to see the abbey and landscape that gave Bram Stoker his inspiration for his book.

After unpacking in the hotel, myself and my friend Lee, headed for the 199 steps. 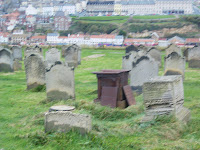 We climbed the steps, walked through the graveyard and headed towards the abbey. Before we left the graveyard, Lee started to get an icey feeling in his head. We also noticed that some of the graves faced east and not west.


We deceided to come back after dark and headed towards the abbey. I was in awe of this place.

Anglo Saxon burials have been found here and evidence of an anglo saxon settlement has been found nearby. 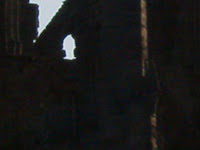 We found the window that St Hilda is said to appear between 10am-11am. We will come back tomorrow at this time to see if anything happens. 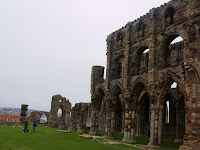 We continued walking around the abbey. I was asking out and taking photo's but nothing happened. It is so easy to imagine this building full of monks and nuns going about their day to day chores. I could have walked around the abbey all day. It is so much bigger than I thought it would be but even though it is in a ruin state. It is still so beautiful.


We returned to St Mary's graveyard after dark. We climbed the steps once more and thankfully as we walked there we didn't come across the black hound. As we were walking through the graveyard, Lee started to get the same icey feeling and this time his eyes were streaming. This seemed to happen several times between the saxon cross and the piate grave. There wasn't a chill in the air or I would have felt the same. All I felt that night was the feeling of being watched but I put that down to my imagination. We both walked round asking out but caught nothing on tape or on camera.

The next day, we went back to the abbey about 9.30am. We waited by the window to see if St Hilda would pay us a visit. But nothing happened.


I would love to return to Whitby, stay longer and go on a ghost walk. It is such a beautiful town and full of such wonderful history. 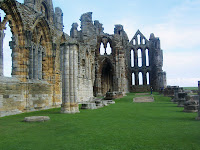 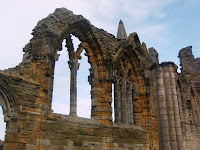