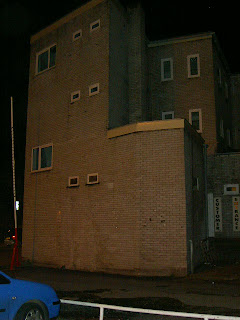 
Phil, myself and two other members attended this investigation.

This area was once Oak Tree Farm. The farm ran its own steeple chase once a year. The course ran all the way down to the River Waldron alongside a woodland. It must have been so picturesque. This all changed with the new Chester railway line. The end of the woodland park and racecourse came in 1868.

The farm became a pub. It was crewe's first theatre and it had its own bowling green. Oak Tree Inn (as it was now known) became the Pioneers Club during 1911-1962.

The building was knocked down after 1960 and a new building has been built and is now an office block.

People associated with this area.....
W.G.Steward - owner of Oak Tree Farm in 1873
John Pointon - landlord of Oak Tree Inn
Frank Middleton - original owner of Breeton House and responable for the alterations. He died
in his office in 1970.
Alan Pleasey - he had offices on the 2nd floor.
John Flatley - he died in 1968 at the age of 42, of a heart attack in one of the shops below.
Jim Armstrong - known as Big Jim. He was a big jolly man and the Pionerrs concert secartary
during the 1950's
Bill and Clara Nield - they were the stewards of the Pioneers from 1952 - 1960
Derek Ross - he was an American who died in 2000 of cancer. He had offices on the top floor.

A man is seen by the lift on floor two.

Feeling of being watched.

Internal telephones ring when no one has used them.

We started our investigation at 10pm and we started on the 1st floor. After we had been asking out for a short time we were getting tapping sounds and a cold spot.


We made our way to the second floor. The middle office had an uneasy feeling. It was Alan Pleasey's office. When I walked to the centre of this room, my camera showed no battery but as I walked away, my camera was ok again. We were also picking up cold spots in this room.


As we left this room, we stayed in the corridor for a while. As we were asking out, the area felt horrible and an instance feeling of being watched.

It was now a little after 11pm and we made our way to an adjoining building. We saw a small light in front of us and again trouble with our camera's draining out of battery. One of our team felt as though their throat was being pressed hard by unseen hands. 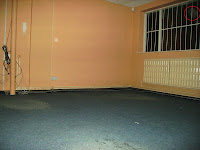 By 12.30am, we decieded to go back into the main office building and to the 2nd floor. We were asking out and straight in front of me, the fire door opened and closed. We also heard 4 bangs, as if someone was kicking a ball against the wall.

We finished at 3am. I think this building had more surprises for us because I really felt as though we were being watched and I think this evening was a little taster into something bigger.

I felt so certain about this, that we were able to arrange a second visit the following night.
Posted by Gill Stubbs at 04:38