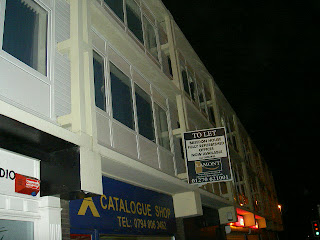 Kath, myself, Phil and two other members attended tonight's investigation.

We started our second visit on the 2nd floor at 10pm. We split into two groups, one group staying in the corridor and the other in the middle office. Between the two groups, we heard a door close in the corridor, lots of creaks, cameras, walki talki and camcorders failed. A dark shadow was seen and knocking sounds heard in the corridor.

We left a trigger object in the office and left to go to floor one.


As we walked down the corridor on floor 1, Kath saw a figure through a fire door. She described him as about 5"8, dressed in dark blue jeans and a pale grey jumper. At the same time, Phil saw a dark figure on the top of the stairs. We stayed in this area for a while but apart from Kath's camera turing off, nothing else happened.

At 11.30pm, we headed into the adjoining building. We walked around asking out as we went. We only stayed here for an hour as nothing was happening.


As we left to go back into Breeden House, we could smell tobacco. But no one was allowed to smoke inside the building and there was only us in the building.

We went to look at the trigger object. It had moved slightly but was that because of unseen hands or due to the heavy traffic outside.

As we were walking out along the corridor, we heard a door bang twice and Kath thought she heard a couple of men talking.

We left at nearly 2am.

Some interesting finds came out. Did we catch a figure and hear a conversion. We found out later that the descripition Kath gave us about the figure matched the description of Frank Middleton.
Posted by Gill Stubbs at 04:43