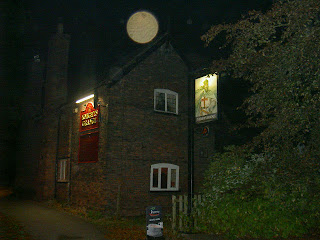 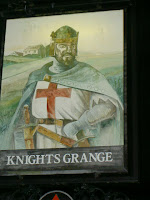 The Grange appears for the first time in 1325/6 as Grange of Knytes. The building was once a moated Manor House and farm. Young men called Knights worked as labourers and produced food for Vale Royal Abbey.

Hugh Starky owned the property. He died here on the 21st June 1609.

Lady Mary Cholmondeley bought the property and it stayed in the Cholmondeley family for many years but tenants lived in it. This is one of the oldest brick buildings in the country and this is probably due to the building work and maintance ordered by Lady Cholmondeley.

The last tenant was Thomas Bourne, when in 1912, it was sold at aution to help fund Lord Delamere's trips to Kenya.

The old farmhouse is now a public house and part of the land forms a sports centre.

Albert Stanley was the landowner in 1903-1904. The story goes that his daughter was seeing a young man. Albert found this out and felt that this man was not good enough for his daughter. It is said that there was an accident and Albert shot the young man dead. His daughter never forgave him. But the question is was it an accident?

There are two slightly different versions of this tale----

VERSION 1 --- Ida was a young girl from Overton and she was befriended by Peter, a Canon of Norton Priory. He became Abbot of Vale Royal (an unlikely change of order). But there was an Abbot called Peter. He was the 5th Abbot around 1320-1340. Ida entered the Convent of St Mary at Chester. The Abbot had to visit the city but he was taken ill. Ida stayed with him and nursed him back to health. But they fell in love. They realised that their vows prevented any relationship on earth. But they agreed to be buried in the same grave, so they could be together for eternity.

VERSION2 --- When the Abbot fell ill, she left her Convent and nursed him till his death. As a mark of her kindness, after her death, she was brought to Vale Royal and buried.

To this day, it is not understood why her body was buried at Vale Royal and a monument was built in her honour.

--- An Edwardian man called Albert. He is described with a grey goatie beard, wearing a black suit plus a watch and chain.
--- Ida the nun has been seen sitting on a chair by the front door.
--- Tables and chairs have been heard moving across the stone floor.
--- Shadows seen.
--- A woman has been seen upstairs.
--- Pool balls move on their own.
--- Things move or disappear.
--- During 2007, a customer's dog wouldnt stop barking at the fireplace in the lounge.
--- The function room upstairs has a bad feeling, this has been felt by several people.

Kath and I arrived at 10pm. We had a walk round the building and we talked to the bar staff. 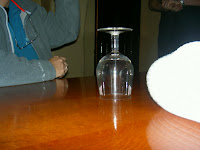 We started in the function room upstairs with glass divernation. We noticed a cold spot by the table but nothing else happened.

A few people from the pub now joined us, so at 12am, we split into two groups. Kath took one group downstairs and I stayed in the function room. I got my group asking questions with the glass while I watched from the loft above. I stayed there because while I had been in the function room, I was getting the feeling of being watched from this loft. A tickle of information came through, it seemed a man was trying to talk to us, his first name began with A and his surname S or T. I shouted if he could do anything to me and I felt a stone roll past my feet. But I couldnt see anything.

At 12.50am, Kath radioed me to tell me that she and another member of her group had seen a figure. She described it as a hooded cloak figure and the cape was flowing as though in the wind. Nothing had showed up on camera. 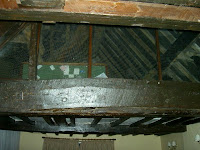 Just after 1am, we asked the other people to stay downstairs, while Kath and I went back upstairs. Nothing happened but we both felt as though we were being watched from the loft again. We had a look but found nothing. 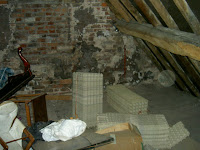 This promised to be a good night but I must say I think the other people who joined us for the night were messing about and they had been drinking. We all like a joke but when conducting an investigation, things must be done properly unless it is a waste of time. We put a lot of time and hard work into researching the history of the area and the property we are investigating and I must say when someone agrees to let us investigate their building, we do so with the upmost care.
I would like to go back and investigate this building again. I did feel that I was being watched and it did feel quite bad and who was the hooded figure that Kath saw?
But if I did go back, I would insite that no one from the pub was involved.
Posted by Gill Stubbs at 05:25