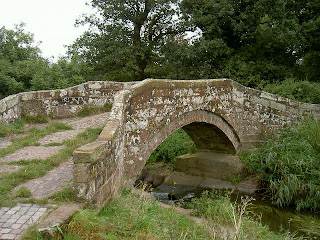 
Kath and I deceided to take a walk around this area and see if we could undercover the story about a lady named Grace Trigg who died around here.

This area which includes The Headless Women pub and Hockenhall Hall. It is said that the headless woman who roams this area is Grace. But I have found another tale about a headless woman but her name is Dorothy. Both ladies are from the same time (Civil War 1643 - 1644). Here are the stories that have built up around them.

DOROTHY
Dorothy was accidently decapitated by her father, as he tried to save her from a group of drunken roundheads. Her headless body is said to drift aimlessly around the village of Duddon. So could it be Dorothy that is seen in and around the pub and not Grace.

Grace was a maid working at Hockenhall Hall. Squire Joseph Hockenhall had been warned that a patrol of Roundheads were on the way to arrest him because he was a Royalist. He fled with his wife, children and the rest of his servants after hiding his family's treasure. He left Grace behind to guard his treasure.
The soldiers arrived and tortured Grace to tell them where the treasure was. Grace refused to betray her masters trust, so they killed her by chopping off her head. Since then, Grace's ghost has been seen carrying her head under her arm walking along the old bridle path between the hall and the pub.

MOST HAUNTED
Most Haunted came to this area and the medium, David Wells, told this version that he had picked up on -----------
Grace was in her mid 20's to early 30's. She was not a servant but a member of the family. When the rest of the family left, she stayed with some other people to look after the house and contants.

Grace was attacked by the Roundheads but she got away and ran in fear for her life. Grace fled to the bridges, where 12-20 Roundheads caught up with her. She was raped and beaten up so badly that her head came away from her body. Her body was dragged off somewhere by the stream but her head was carried of by the stream but her head was carried of by one of the soliders.
In Tarvin, there is a house called The Tudar House. This black and white building is on the outskirts of the village. There is a Royalist solider who lived in this building and looks out of one of the windows. His name is Charles and he was in his late 30's to early 40's. He was like a body guard to Grace. He could have been an uncle or other member of her family. After Grace died, she stood outside the building as this man died. He had been shot as a canon ball flew through the window and blew his head off. It is said that Grace smiled as this man died. She blamed him for her death because he had not saved her.
David Wells also mentioned The Headless Woman pub. This pub has four ghosts and Grace visits here. Grace's body was thrown into a ditch near here but she was found without her head. So this is why she is seen with and without her head. David Wells also said that Grace had not been given a proper buriel, as her body was not regconisable when it had been found. The other ghosts in the pub are a little girl who runs around and two men. One man is inside the pub and one male is outside, he like gardening.

OTHER DIFFERENT VERSIONS
--- a female servant from Hockenhall Hall became pregnant by the Squire. He of course, didnt want anything to do with her and she hung herself. Her neck broke and her head fell off. She was buried in an unmarked grave.
--- Grace did not stay behind to guard the treasure. She went to the bridges to met her boyfriend but for reaons unknown, that is where she met her death.
--- Dorothy is the headless woman that walks around the village and the pub not Grace.


INVESTIGATION
This investigation was to try and find out if it is Grace that walks around the bridges or someone else.

The path leading from the hall to the main road by the pub includes a set of stone bridges which locally are known as The Roman Bridges.

Kath and I took a walk along this pathway to see if we could find out what was happening here.

We walked along and we spent quite a while on each bridge asking out.

We spent more time on this middle bridge as this is where it is said, that Grace was attacked.


Nothing happened on this day but this whole area is full of history, that a second visit is worth while.
Posted by Gill Stubbs at 05:17