Me and Kath returned for our third visit. We were joined by two other people from the office. We started at 9.45pm. We split into two groups. Kath went onto floor two and I stayed on floor one. 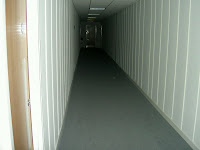 As I was asking out, I got the feeling again of being watched, as I walked down the corridor. Was it my imagination? Nothing had happened to Kath.

Kath joined us and she saw a shape but couldn't described it and we all felt a cold spot about half way down the corridor. The EMF reader went off at the same spot for a few seconds. I heard footsteps.

At 11.30pm, we went to the office on the second floor. Kath stayed in the corridor and I went into the office. As we were asking out in the office, we heard lots of banging. Kath never heard this. I started getting a sharp pain in my chest. It was taking my breath away and I felt sick. I had to leave but when I entered the corridor, I felt much better. Kath saw a small light coming towards her then disappear.

By 12.30am, we were all in the corridor. I thought I saw someone watching us from the otherside of the door. I told Kath and she thought the same. It went very cold, very quickly. We went through this door and our EMF reader went straight to red. 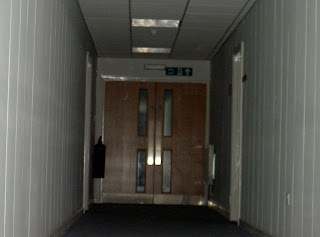 I felt as though we were being watched again. This time through the door leading to the stairs. I took a few photo's . Have a close look at this photo. To me, it looks like a child with blonde hair wearing a blue top and a red neck tie or bow. It also looks like a snarling dog at its side.


We finished at 3am, as nothing else happened.


I found this investigation very interesting esp on a personnel level. I found out that the office that I was feeling the chest pains was due to Frank Middleton. He died of a heart attack in that office. Had I picked up on him?

During our three visits here, I have said throughout about the feeling of being watched on our investigations but this time did I catch who had been watching? If so, who was that child and why did they want to stay?
Let me know what you think of the photo.
Posted by Gill Stubbs at 04:49