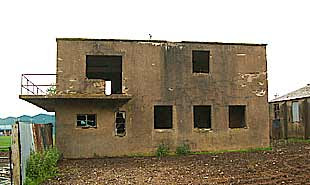 This airfield was built in 1942 and opened on the 14th March. It closed in October 1946. This was a training station and the local airfield to support Liverpool, Manchester and Cheshire during World War 2. There used to be three runways which are now demolised, two hangers and a Watch Tower.

HISTORY DATES
14th MARCH 1942 ... RLG for Tern Hill with No 5 (pilot) Advanced Flying Unit with Miles Masters were based here.

31st JAN 1944 - 21st JUNE 1945 ... No 11 AFU moved here with Oxfords from Shawbury. Later equipped with Masters, Ansons, Harvards and Hurricans. The squadran was then disbanded here.

22nd OCTOBER - MAY 1946 ... 22 Service Flying Training School formed here with Harvards. It then moved to Ouston.

... Airmen have been seen walking around the base.
... The sound of a Bomber aircraft has been heard when the sky has been clear.

Kath and I went for a walk around this airfield.

There has been so much of the airforce base destroyed but as you walk round your imagination takes over and you can easily picture people abot their day to day jobs.

As we walked round, we were asking out loud and conducting EVP experiments. My imagination did take over and I did get the feeling that I was being watched.

We did not catch anything and after a couple of hours we deceided to finish.

This is a great location but not with easy access, so an overnight investigation is nearly impossible, which is such a shame but you are now unable to reach this area without going on private land and most of the land has been demolished.

Some people have looked at this photo and said they could see a figure standing at the window.
See what you think.
Posted by Gill Stubbs at 11:52