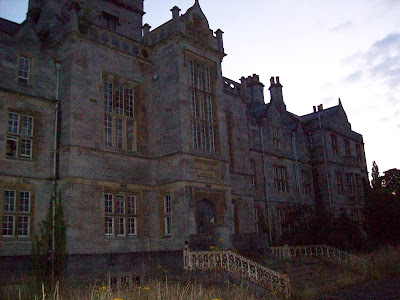 This was once such a beautiful building. This Victorian Gothic style Asylum was built between 1844-1848.

It all started with a letter written to The Tomes regarding the poor treatment of Welsh pauper lunatics in English Asylums. The letter was written by Dr Samuel Hitch, Medical Superintendent of Gloucester Lunatic Asylum in September 1842. Over the next two years, meetings were held to discuss the construction of an asylum in Wales.

Building started in September 1844, staff were appointed in June 1847 and by October 1848, the hospital was complete and opened.

In a way, it is a shame that building work had to continue to make room for extra patients. It proves that there was a need for a building like this. But let us not forget, not all these patients were mentally ill, some women were expenting a child but were unmarried and they were hidden away because of the family's shame. Some people probably just didnt follow the family line and a family would pay to inprision someone just to keep them out of the way. And some people would pretend to be ill, so they could go somewhere like this instead of a Workhouse. Life was hard and tough here but it was like living in a small village. If you were classed as a helpful patient, you helped and worked around the site, ie on the farm, in the grounds or even in the brewery. 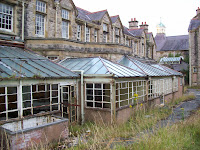 The building work continued, more extension work in 1897. A laundry, boiler house, engine room and an Isolation hospital were completed in 1902. During 1903-1905 other accommodation was built.

In 1926, Gwynfryn House was bought to accommodate 25-30 useful female patients. 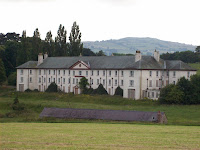 By 1933-34, other buildings were built and bought including this Nurse's Quarters.

Right up to 1969, new buildings were built including this horrible nurse's training school.

But just 20 years later, plans were drawn up to close the hospital. In 1995, the main hospital closed and Gwynfryn followed in 2002.

During its life, the hospital held many events. The first annual ball for patients was held in December 1852 and in 1867, the first hospital band was formed.

During the 1920's-1930's, many physical treatments were developed including malarial treatment, insulin shock treatment and sulphur based drugs. Electro - convulsive therapy (ECT) was first used in 1941 and the following year, prefrontal leucotomy operations were carried out.

This site is extreme in human emotions. On one hand you have the joy and happiness from being treated as a human being. You could have had a job and or been involved in the band or dancing at the ball. But there was the horrible, painful side of the experiments. So from laughter to cries of pain. It is hard to believe that this did not leave some sort of impression on the land.

--- Before Most Haunted came to this area, there were no reports of witchcraft but they claimed that this area had been cursed by three witches who had lived locally. They claimed that they had been tried and executed nearby. One is said to be named BELLA. I cant find out any information about this but I will include their claims in this list.
--- ISOLATION WARD -- figures have been seen walking and there have also been sightenings of witches.
--- UPPER FLOORS -- flying demons said to have been conjured up by the witches, also figures seen
--- CELLARS -- it is claimed that tunnels from the cellar lead to one of the witche's house
--- INFIRMARY -- two old ladies have been sighted and many other figures seen walking around
--- MORGUE -- sightenings of a 1940's matron and a tall lab assistance have been seen
--- TREATMENT WARD (main building) -- screams of pain have been heard
--- ON THE GROUNDS -- the lab assistance and matron have been sighted. Also two students have been seen walking here. It is thought they were murdered here and their killer was never caught.

--- NURSES QUARTERS -- the ghosts of nursing staff have been seen and heard. 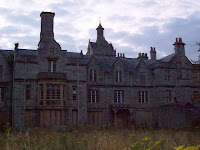 This was mine and Kath's first visit to this wonderful site. During the day, the site lays dormant, quite and almost sleepy. But as darkness creepted in, the area seemed more like the set of a Hammer House of Horror's film.

As we walked round, we saw what a terrible state these buildings were in. Looking through the windows, we could see that floors had collasped and walls were in a poor state.

We walked around the site and then headed to the Chapel. Unfortually it was too dangerous to go inside. 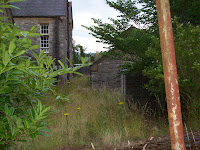 We walked to the morgue. It was easily accessable but the main slab had been vandelised. We stood here for a short time, asking out but nothing happened. We were both amazed just how small this morgue was considering how big the whole site was with what would have been hundreds of people, mostly sick, lived here. The freezer only held 6 bodies. 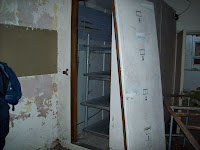 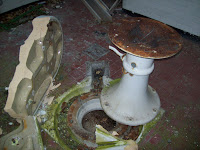 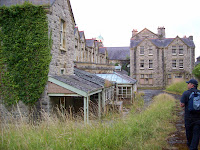 As Kath and I walked towards part of the main building, I was wearing my rucksack on my back and I felt as though someone was trying to push it off me. Then all of a sudden, my rucksack felt as though it had been hit and all of the conents fell out. I turned round but no one was there and Kath and walking ahead of me. Then we heard a male voice but we couldnt understand what had been said. This was followed by a woman's voice, who said "MARGARET". We had not met anyone else walking around the site but you cant discount someone hiding.

Due to time, we had to leave about 5pm. This was only a rece for a full investigation at a later date. But had we already touched on some activity.
Posted by Gill Stubbs at 05:12