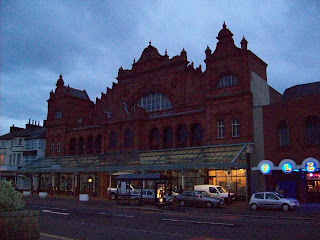 Morecombe is a seaside resort in Lancaster. In 1889, the villages of Bare, Poulton-le-Sands and Torrisholme collectively became known as Morecombe, although these areas are still known by their original names today.

The Winter Gardens was originally the town's swimming baths and dates back to the 1870's. 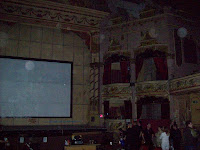 In 1896, the building was sold to Messrs T BAker and R B Abbott. After a hugh transformation, the building was opened as The Victoria Pavillion. It had the oriental ballroom designed by Messrs Magnel and Littlewood. It housed the largest auditorium in the world. Due to the buildings popularity, it became known as the People's Palace.


Unfortually, the company went into liquidation in 1908 and it was bought by Broadhead and sons. They added a funfair outside and a billiard room under the ballroom.

This building was taken over WWll by the RAF and they ran some of their own shews here. 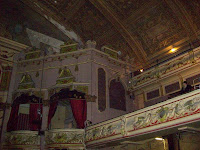 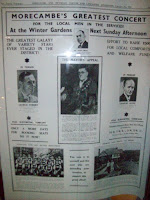 Amoung some famous names who had stood on its stage include ...... George Formby, Ken Dodd, Gracie Fields and Thora Hird, who met her husband here. He was a drummer in the Winter Gardens band.

The Friends of the Winter Gardens was formed in 1986 to help with the restoration of the building. It is now a Grade ll listed building.

--- It has been said that there is an invisible line running down the centre of the building, one side good and the other side evil.
--- A seven year old child is seen in the building.
--- Mr Mangel and Mr Littlewood are seen in the circle area as full figures and aslo misty forms.
--- An Edwardian woman is seen in the gods and on the staircase. Many have witnessed her falling down the stairs. The story is that she had a row with her married boyfriend and she either slipped or was pushed down the stairs. She is said to glare at whoever sees her.
--- A woman named Jayne is seen in the upstairs dressingroom. It is said she was a failed dancer and had to change her career and became the wardrobe lady. Her spirit is said to stay here out of bitterness for a failed career.
--- Hot and cold spots.
--- A man and woman seen in either Navy or RAF uniforms, walking round the building.
--- An angry, unpleasent man seen walking around named Henry.
--- The caretaker from 1910 named Stan is seen esp in the upper circle. He was tall with dark hair. He was a violent, nasty drunk (so there is the smell of alchol with him).
--- Two women actress are seen. One is called Mary.
--- Charles Straton is seen around the building. He was the midget from the circus.
--- Alice Shields is seen in the building. She died in the dressing room. She was an actress who dressed in men's clothes.
--- The building is also said to be associated with the Druid circle just above Morecombe, human sacriface and Jake(the local name for the devil).

This night had been organised by another group and eventhough I dont like these paid events. I wanted to investigate this building and this was the only way to get in. So me, Kath, Jackie and Steve went. 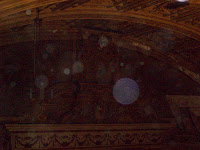 We all met at 9pm and after a little walk around the building, we split into three groups.


By 10.30pm my group were behind the stage area. The medium was picking up on a few names of enterainers who had played here. Many people in the group thought they were being watched. Kath and I (being the brave souls that we are) went to have a look around but saw and heard nothing. We returned back to the group just as the medium was telling them that he was picking up on a woman who had fell to her death. 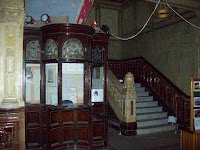 We all met up for a coffee break at 12am and then continued at 12.30am. We headed to the first floor but we stopped firstly in the lobby. The medium was picking up on a boy who had drowned. Some people thought they saw figures sitting in the Gods and main sitting area. I think this was a trick of the light, as they were looking through closed doors. Nothing else was picked up as we walked around the 1st floor and sfter a quick break, we headed to the 2nd floor. 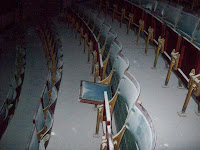 As we entered the circle, the tour guide told us a seat was down but I was unable to see this area before, so could not tell if it had been like that all night. At 2.30am, a member of our group saw another chair down. I didnt see anyone in that area but it cant be discounted that someone hadnt been messing about. This is what I mean when I say that I dont like going on events that are run by another group. I not saying that foul play had been used here but there is no way I can discount it.

As we left the area and headed down the stairs, me, Kath and Steve heard 3 loud bangs and Jackie heard what sounded like keys dropping on the floor. We saw nothing and we couldnt recreate the sounds.

After another coffee break, we headed into the cellar at 3.30am.

There had been a lot of talk about the cellar all night. And so it had created a lot of hipe regarding the so called dark entity which stayes here. In fact, an earlier group claimed they had encountered this entity. This entity is said to be pure evil, so why stay in a dark, wet cellar when there is the rest of the building to roam around?

Our group formed a circle but Steve, Kath and myself stayed out of this. The circle were blessed to keep them from harm but this was one of the reasons we didnt join in. We wanted to experience this entity and also watch what the other people react to what was happening. Many people started to see a blue mist forming in the middle of the circle. The medium said that two entities were with us. A few people were getting a little scared and this soon spread through the circle. My friend Jackie, was shaking and getting upset. She had to leave the room. 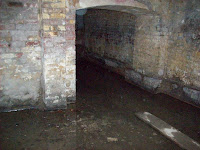 The meduim closed the circle and told everyone to leave. I couldnt leave, if this was true evil, I wanted to face it. Istayed in the cellar and went further down into the cellar. I was asking out, telling the entity to face me. I was on my own and if these entities were in fact true evil, surly they could leave someone on their own without doing something to them. But guess what, nothing happened. So much for evil.

This is such a great building. I would love to investigate this building with one of my groups without anyone else and then I would be able to judge whatever happened much better noing that nothing had been set up. I do think too many ideas had been put into people's heads throughout the night esp the cellar. Shame. 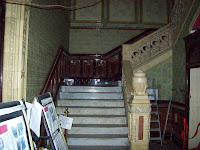 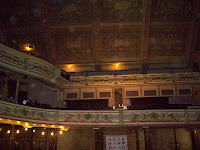 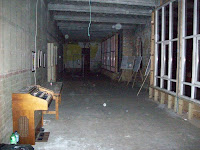 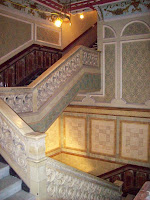 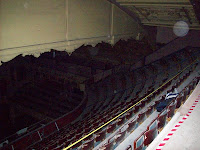 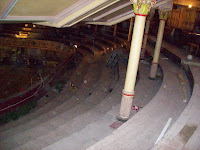