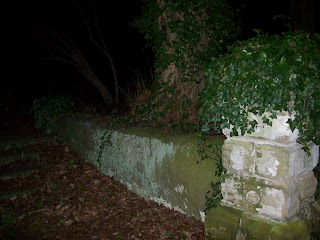 There has been an estate and Hall here since the 13th century but some say possibly earlier.
During the reign of Henrylll, this was the residence of the Merbury family. The estate stayed in the family until the death of Richard Marbury in 1684. The estate was then run by his sisters, Katherine Marbury, Elizabeth Thacker and Mary Woods. But in 1708, they sold it to Richard Savage, 4th Earl Rivers of Rock Savage. His daughter married James, 4th Earl of Barrymore. Improvement work was carried out and stables were added. Further work was carried out in the 1840's. The Hall passed to The Hon Richard Barry (MP for Wigan) and after to his nephew, James Hugh Smith Barry.

In 1842, there was a fire at the hall, the remains were knocked down and work began on the new hall. By 1850, Alfred H Smith Barry was Lord of the Manor.

The hall was aquired for army use during WWll. There was an army camp and prisoner of war camp on the estate.

After the war, the hal and estate was owned by ICI. The hall fell into disrepair and permission was granted in 1968 to pull it down. It was demolished in January 1969.

The estate is now jointly owned by Cheshire County Council, a property developer and ICI. All the remains of the hall is the uneven partial outline of stone and bricks on the ground.

There are at least three different versions of this story:

1. Lord Barrymore of Marbury Hall was due to marry a lady from a weathly London family. As a wedding gift to her, he bought her a greyish brown thoroughbred horse called Dunne Mare. His wife to be had choosen this horse and he promished her the horse would be at Marbury Hall on their wedding day.

He gambled with his friends that the horse could not make it to the hall by sunset on the day of his wedding. The horse set off, riden by an amateur jockey at sunrise and arrived exhausted at sunset. Lady Barrymore ran out to meet her horse, only to watch it collapse and die in the courtyard. The horse was buried in the grounds. It is said that Lady Barrymore was heart broken and died soon after.

2. A bet was made between Lord Barrymore and a wealthy London merchant that this horse could not leave London at sunrise and be at Marbury Hall by sunset. If so, Lord Barrymore could marry his daughter. The horse and rider completed the journey but as the horse was lead to Marbury Mere to drink, the shock of the cold water, stopped the horse's heart and it collapsed and died.

3. During the Jacobite rebellions, James 4th Earl of Barrymore and a Jacobite at heart, was suspected of treason. A messenger was dispatched on a horse called Marbury Dunne to warn him that troops were on their way to arrest him. The horse galloped so quickly, that the Earl was able to completely cover his tracks regarding any documents and evade capture. The horse collapsed and died and was buried somewhere at the back of the hall.

Whichever version is correct or you beleive, Marbury Dunne is said to be buried under a gravestone somewhere on the hall's land. It reads:...........
HERE LIES THE MARBURY DUNNE
THE FASTEST HORSE THAT EVER RUN
CLOTHED IN A LINEN SHEET
WITH SILVER SHOES UPON HER FEET

There are at least 5 different ladies associated with Marbury Hall

1. This lady is associated with Marbury Dunne.
2. This English lady was one of the Smith-Barry's. She was murdered on the 7th step on the main staircase. The blood stain would never go away. When the hall was being rebuilt, bones were found near the staircase.
3. One Lady Smith-Barry was having an affair. Her husband followed her one night and killed her when she returned back. It is said she met her lover in one of the tunnels under the hall. One tunnel is on the far left of the courtyard as you approach from the long straight driveway and another has been discovered in a woodland area behind the hall where a great tree is situated.
4. Miss Alice Knappett loved the place. She was the Head Housemaid at the turn of the 20th century. She was a matronly figure who rode her bike on the grounds.
5. James Hugh Smith-Barry (1748-1801) travelled around Egypt. While he was there, he had an affair with a stunning Egyptain woman. They fell in love but he knew he couldnt marry her, so he came home alone. She followed him shotly after but he had already married. So no one would find out about them, he employed her as a maid but there affair continued. But it didnt last long. She died on the staitcase, some say she was killed. She had told her lover that if she died before him, she wanted to be embalmed and kept in the hall. This he did but as time passed, she was moved to Great Budworth Church. But she was returned to the hall as ghostly things started to happen at the hall. There are a few theories to her final resting place, behind the hall, in the Rose Garden, behind the swimming pool or her bones were thrown into the mere.

... Horse and carriage has been seen and heard down the main drive leading to the hall.
.. An old maroon and cream car (similar to an old fashioned Bently) has been seen driving by the hall.
... Marbury Dunne has been seen galloping, without a rider, along the now mostly closed road that used to link Marbury with Northwich.
... Marbury Dunne is also seen on the hall grounds but with a lady riding her.
... A lady in a long gown walks the grounds.
... Poltergeist activity was reported in the hall before it was demolished.

Phil and I arrived about 9pm. 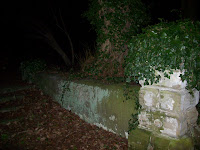 We spent about four hours walking around, taking photo's and asking out. 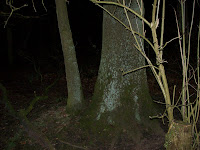 The whole area felt spooky and I felt as though we were being watched. But of course it was dark, we are in a wooded area and there are animals about. 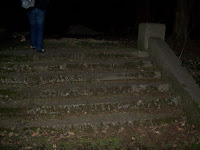 Nothing was recorded on this night but I would love to go back.
Posted by Gill Stubbs at 05:30