The Boot and Slipper, Wettenhall 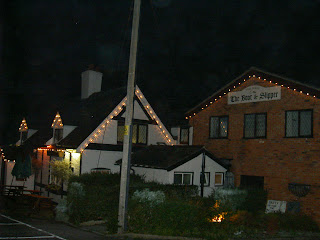 Our second investigation here started off as just me, Phil and Kath calling in to talk about our findings from the week before.

As we were talking to Trudy, we all heard the cellar door bang. Trudy told us that this was not the first time since our last visit, this had happened. She also told us that knocking sounds had been heard all week.


Kath, Trudy and myself went into the cellar (which is more a store room) for quite some time. As we were asking out, we heard shuffling noices and we all felt that we were not alone.

I took a series of photo's.
This photo was the only one with anything on. If this is dust, why had nothing showed up on my other photo's.

We left after a few hours knowing we would return soon. Something was happening here.
Posted by Gill Stubbs at 04:34