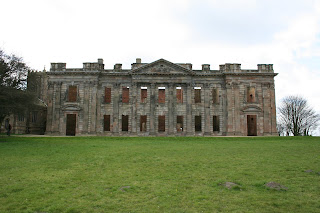 This site has been occupied since Saxon times. It formed part of an estate owned by WULFRIC SPOTT(died 1002). He left his estate to Burton on Trent Abbey.

During the English Civil War, Francis Leke was of course a Royalist. The hall is on the opposite hillside to Bolsover Castle and this was on the side of the Roundheads, so you can imagine the tension and possibly small skirmishes that took place between the two. Francis Leke was taken prisoner after a force of 500 roundheads seized the hall. But the family kept the estate because after the war a fine of £18,000 was paid to Parliament. 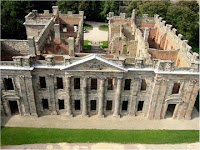 After the death of the 4th Earl of Scarsdale in 1740, the estate was bought by Godfrey Bagnall Clarke. After Godfrey died in 1774, the Marquis of Ormonde gained ownership through his marriage. After his death in 1824, Richard Arkwright Junior was the owner. In 1890, William Arkwright of Sutton Scarsdale was the owner. 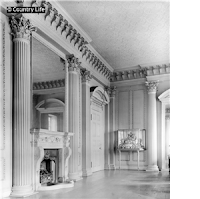 The hall was left and fell into neglect but in November 1919, the estate was bought by a group of local businessmen. These men didnt care about the property, all they were interested in was how much money they could make. In my eyes, these people are as bad as vandles. They stripped the assets of the hall, even removing the roof in 1920. Some of the hall's oak panelling went over to America. It has even been used on film sets during the 1950's 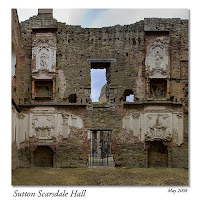 The estate was bought by Sir Osbert Sitwell of Renishaw Hall in 1946. He wanted to keep it as a ruin.


Scarsdale Hall is now in the care of English Heritage. 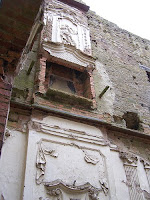 It is such a shame that this once beautiful hall with formal gardens and inside, marble fireplace, oak ornamental panels, Italian crafted plasterwork and a large mahogany staircase, was left and then stripped. All that remains today is the skeleton ruin

As you might be able to tell, is that I love this place and if there was ever a case for a time machine....it is here. I would buy this prpoerty and keep everything in its place.

PARANORMAL ACTIVITY
..... footsteps heard
..... stench of tobacco in the tunnels under the cellar
..... the ghost of Sir Nicholas has been seen in the porch of the church next door
..... a woman in white has been seen walking from the church to the hall

1 ... Sir Francis Leek who was captured by Cromwells soldiers after the seige during the English Civil War, escaped and joined the King. As a result of his brave loyalty, he was created 1st Lord Scarsdale.

When the King was executed, Sir Francis had his own grave dug at Sutton Scarsdale and every friday, he dressed in a sackcloth and lay in his own grave in commemoration of the King

2 ... Sir Nicholas Leek before he left for the Crusades, took out his sword and split his wedding ring in half. He gave half to his wife and kept the other half as good luck. 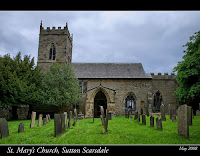 He was captured during the crusades and spent many years in a prison. One day, he was dreaming of home and he was transported through the air and landed in the porch at the church of the hall.

He went to the doors of his house but no one recognised him. He demanded to be let in but they refused him. Of course he didnt look like a Lord because he would have been dressed in rags, dirty and long untidy hair and beard. He took out his half of his wedding ring and told the servants to give it to his wife. She put the two pieces together and realised her husband had returned home.

Every year after this, Sir Nicholas had bread baked for the poor people of the parish with each loaf inscribed with a large letter N in thanks for his release. 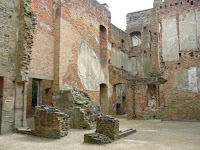 It is so said to walk around this once wonderful building. As you walk round you do get the feeling you are not alone and that you are being watched.


As I walked round, I took photos and used my recorder to record any EVPs as I asked out.

I didnt get anything but I felt as though I was followed or was that just wishful thinking.
Posted by Gill Stubbs at 05:00