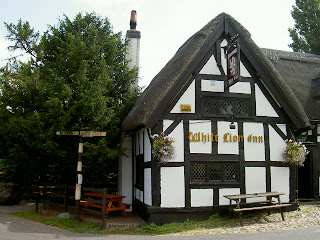 The public house and the church are across the road from eachother.

The Inn dates from 1614, this date appears over the door. The Crewe Family emblem appears on the pub and gave it its name.

Old records indicate that The White Lion was not used solely as an inn until the latter part of the 19th century. Prior to this it was used as an office for John Crewe to collect rents. It was also used by clerk's for the parish. It was sometimes referred to as The Clerk's Cottage. 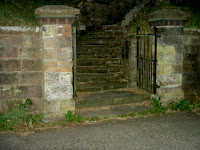 Across the road towards the church are some steps. These steps and the wall used to belong to another public house. This was called The Punchbowl. It was also a shop. It was knocked down in 1867.


The church is dedicated to an 8th century saint. It is built on an ancient burial site. There has been a church here since Norman times. There was a schoolhouse in the churchyard.

At the back of the church is The Old Rectory. The top storey (which has now been taken off) was haunted by Randle Crewe. He would walk along the passage at 12 midnight.

This small area was the site of the Christmas Day Massacre of 1643. Twenty men hid in the church tower. They were burnt out by the Royalists. Twelve were killed.

Me, Kath and Phil with another member started in the churchyard at 9.3opm. 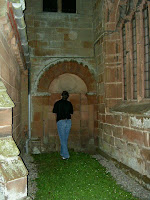 We walked round asking out as we walked. Phil stayed by the church wall and I took three photo's one after another. Two photo's had an orb on. 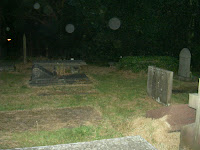 We continued to ask out as we walked around. I took a lot of photo's with orbs on but just as many without orbs.


We went into the pub at 10.30pm and sent up our equipment. We started our investigation at 11.45pm.

Phil and I took the temp readings and then we all went upstairs to the Function room. 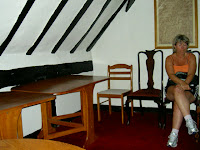 It was very warm. We asked out several times. Kath had her leg tickled and the torch flickered when we asked anyone to mess with it.
Phil had been round this room with his Neg Iron det and he found nothing but when he passed it to me at 12.45am, it went off.

We went downstairs into the bar area. Phil's neg iron det went off by me again. We asked out and took photo's but nothing else happened.

At 1.30am, we split into two groups. Phil went into the next room. Kath and myself stayed in the bar. Kath and I were asking out and table tilting but apart from me getting goosebumps, nothing happened. Phil and the other member were getting lots of photo's with orbs on, or was it just a dusty room.

At 2.30am we swoped rooms but nothing happened and we all tried table tilting in the room next to the bar. Still nothing. By 3.15am, Kath tried a pendulum but the results were mixed and we decieded that if we were in contact with someone, they were messing about. So we stopped. 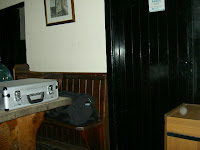 By 4.20am, we were sitting in a small room at the back of the pub. I caught this strange orb (or just a very bright piece of dust)

Very disappointing, no real evidence but when we were looking through what we had done, we 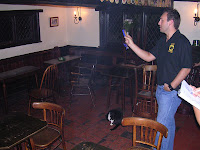 caught this strange mist by Phil. This did not show at the time and no one else noticed this on the night even Phil.
Posted by Gill Stubbs at 06:43