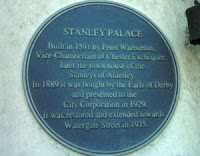 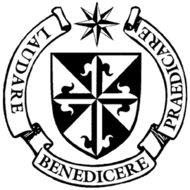 Stanley Palace is a 16th century Grade ll listed building near the town centre. It was formerly called Derby House and it is near a site previously occupied by the Dominican Friars.

It was built for Pater Warburton (a Chester Lawyer, a Judge and a Knight). His daughter, Elizabeth, took over the house when she married into the Stanley family.

James Stanley, 7th Earl of Derby, was an out spoken Royalist and as this area was in control of the Parliamentarian Forces during part of The English Civil War, James was captured in the building, taken to Chester Castle and executed in 1651.

By the early 19th century, Stanley Palace was no longer a mansion house but changed into three shabby cottages. In 1889, Edward Henry Stanley, 15th Earl of Derby, bought back his family home. Why had it been sold in the first place?

In 1911, the house opened as a museum and a curio shop by Mr E Booth Jones. It was still three cottages. Tunnels to Watergate and the Castle were found, possibly by a trap door under the floor by the entrance.

During World War Two, this building was used for recreation by service men.

In 1928, the 17th Earl of Derby passed the house over to Chester Council on a 999 year lease. The council has restored and extended the building.

--- James Stanley, 7th Earl of Derby, appears as if in a photographic negative.


--- Elizabeth Stanley has been seen walking the building after her death here in 1627.
--- A tall hooded Monk.
--- Children in Victorian clothes.
--- An old man with a walking stick.
--- A Gentleman Officer from WWll has been seen upstairs by the staircase.
--- A grey haired lady has been seen playing the piano at the far end of the upstairs gallery.
--- An angry sprit on the stairs.

This investigation was run by another group and although I am not keen on these types of investigations because the control is taken out of my hands. It is sometimes nessary to gain access to certain buildings which is run by a group and pay for this but of course you are then joined by some people who just want a trill. Kath and I are very level headed and I will tell you what happened and let you deceide.

We started with a walk around the building at 9.30pm. While we were upstairs, Kath had her head touched, plenty of orbs were photographed and a couple of other people felt that children were playing. To me, half of the room felt warm but the other side felt cold.

By the stairs, Kath felt cold and many people felt that there was a male watching us.


By 10.30pm, we hwaded downstairs to the Queen Anne's room. A lady in the group senced two names - William and Henry and a little dog. She also thought she had seen a coffin and flowers. Kath smelt rotten meat or flesh and had the vision of skulls. She was also starting to feel angry but she didnt know why. Other people senced -- a highwayman having his face torn off and killed, cigar smoke, card playing (like a Victorian gentleman's club), a chapel, a monk, a courtroom and Devil worshipp.

We had a break at 11.30pm. I must say, I hadnt picked up on anything and I also felt that some people were using their imaginations a little too much.

At midnight, we moved back upstairs. We slpit into two groups. We both did some glass work. Between the two groups, we picked up on two men, one nice, the other quite bad.

At 2am, we moved downstairs and back into the Queen's Anne room. We used the glass again. We got the following information.......
--- Freemasons met in this room
--- A Monk killed men, women and children if he thought they were involved in witchcraft
--- Two men were watching us
--- A woman from our group thought she had seen a wolf.
--- Most of the group did not like this room

By 4am, we stood in a circle in the entrance holding hands. Many people said they saw a figure of a man standing on the stairs. Now this is where things were really spoilt for me. In my opinion, the group that ran this night were putting ideas in people's heads. Their imaginations took over and we were being told that a tall monk was standing in a far corner, staring at us. All of a sudden, people starting seeing this monk, heads and legs were touched as the group told us that this monk was walking around us. A couple of people started to scream and getting caught up in the moment.

We finished just before 5am.

Apart from the feelings of Kath (whom I trust), I didnt feel anything paranormal happened. I think the only problem with the night was the imagination of some people which was allowed, and helped, to take over. As I have said before, this is to some people a trill ride and this did spoil it for me.
I did enjoy the building but I would love to return and run an investigation with either of my own groups.
Posted by Gill Stubbs at 05:21