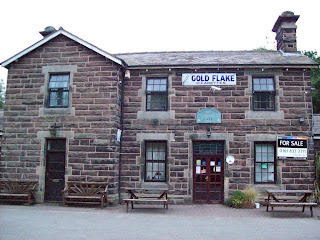 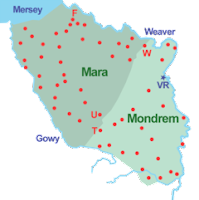 Delamere Forest is the largest area of woodland in Cheshire. The name means Forest of the Lakes. It is 2,400 acres. Delamere Forest is what is left of two forests Mara and Mondrem. These medieval forests stretched from the Mersey to the north, to Nantwich to the south, to Gowy to the west and Weaver to the east.

It was established as a hunting forest for Royalty and Earl's, by the 1st Earl Hugh d'Avranches in 1071. It passed to the crown in 1812 and then to the Forestry Commission sine 1919.

This area was probably used by Anglo Saxons for hunting. But the history of this area can be traced to Iron Age man. At the top od Eddisbury Hill, near Delamere Station, is possibly an Iron Age fort which was rebuilt by Ethelfelda's workforce in 914. It is written in the Anglo Saxon Chronicle that she established a fort at Eddisbury in this year.

Today the forest is used for walking and families go for a pinic but what most people do not realise is the history trail they are walking on. As well as a hill fort and hunting land, Delamere Forest has long been associated with gypsies. A roman road runs through the forest which is now known as the A54. Throughout the centuries, this area was the lication for highwaymen.

This area was also the location for a small skirmish in the 1st phase of the Civil War. At Tarvin, there was a short cavalry engagment around the church in August 1644. A few weeks later, Sir William Brereton arrived, surrounded the village with earth ramparts and put a garrison in the village. He needed a new base nearer to Chester, as he was about to undertake the seige of Chester.
The forest would have seen many armies marching to different areas during the Civil War from both sides. 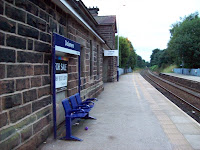 The station was opened on the 22nd June 1870. It is 9 and a half miles form Chester on the mid Cheshire line. The station is unmaned and is a request stop.

... A horse pulling a small two wheeled carriage lit by lanterns. The driver remains motionless driving along Norley road by the station.
... A white lady floats between the trees in the forest.
... A dog like creature has been seen around this area. Its about 60cm tall. 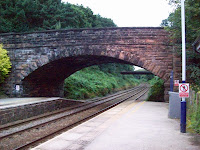 Phil and I arrived about 8pm and had a walk around the front of the station, which includes a cafe and along the platform. 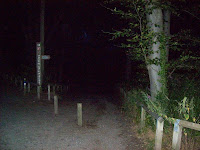 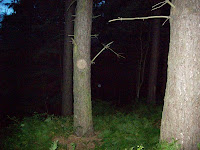 About 11pm, we returned to the station and stood on the platform, asking out. 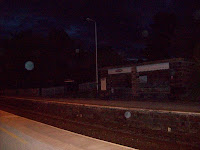 I took a series of photo's and this was the only one with anything on.

We left just after midnight.

The whole area felt so different after dark. Of course walking through the trees gave you the sense of not being alone. And apart from a couple of 'orb' photo's, no other evidence was collected.

This is a great place for an investigation and a second visit is planned.
Posted by Gill Stubbs at 05:36